Starting a for new life (Story of Simo) 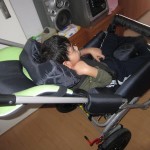 This is a story about another small person we now care for at the “Pink House”.

Simo is 7 years old. When he was only four months old, he fell ill. The diagnosis was horrific – focal cortical atrophy, epilepsy with seizures and anaemia.

Frightened, his mother abandoned Simo and his life continued in the home for babies in Shumen where he seldom left his cot.

A year ago he was visited by our psychologist Nadezhda Petrova and manager of the Pink House accompanied by Galya Bisset, an expert in deinstitutionalization. During early conversations with local personnel, Simo was described as a “living corpse”, great emphasis was placed on his multiple disabilities and the grim prognosis was – “Improvement is not expected.” 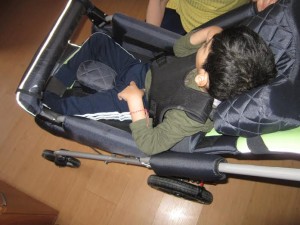 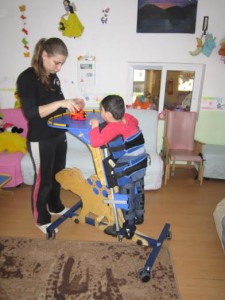 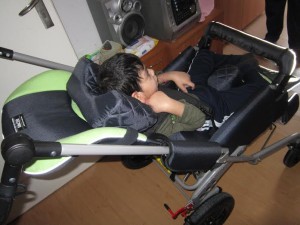 Equilibrium doesn’t think this way. Dressed in new clothes and shoes, Simo left Shumen and came to live at the Pink House.

Here, the youngster’s life is radically different. He sleeps in a bed without bars and spends his waking hours elsewhere. He is looked after by loving carers, enjoys stories and the company of other children. He is especially fond of an inflatable car full of balls. Christmas was a glorious sensory adventure providing gifts to open, a tree and fairy lights.

During the early days at the Pink House, Simo could be found awake, lying  silently in his bed but now he uses articulate noises to signal that he has woken up and, if he is not heard, will  begin to shout to attract attention of the carers. Simo already knows that there is someone to respond to his needs and his desire for contact.

Thanks to the new care regime, Simo is developing quickly – he has learned to turn from his back onto his stomach and back again. He can grasp a toy and play with it. While on his front he can push his chest up controlling the position of his head.

For weeks, carers struggled with feeding because Simo had never learned to eat with a spoon and accept a variety of foodstuffs that have not been sweetened or mashed smoothly. Now, a year later, Simo accepts food with a spoon and difficulties are less common. We are learning what he likes and doesn’t like. Feeding with a spoon used to take an hour but as his ability to chew and swallow improves things are looking positive and now he can finish his meal in 30-40 minutes.

Simo’s physical development is attended to by rehabilitators – Vicky and Sashko.

At first, it was difficult to sustain a vertical position because of contractures and spasms that twisted his body. But after intensive physical therapy he can now stand firmly on his feet with the aid of a verticaliser. For the first time in his life he has the opportunity to observe what is happening around him in the way other children do. This provokes engagement with other people and a desire to play – he sees his reflection in a mirror, he puts toys in a bowl and he is exceedingly pleased with himself.

The biggest benefit for Simo comes from a new wheelchair that allows him to be properly positioned in the sitting position and comfortably supports his body. This means that Simo can be far more active as a fully-fledged member of the Pink House family and can be taken for longer walks or spend more time in the garden, without his body getting twisted or slipping off as it was the case in the wheelchair we temporarily used. Simo came from the baby institution with any wheelchair. Better still, he now goes to a specialized class at kindergarten.

The specialized wheelchair was purchased thanks to the generosity of local people who contributed to our charity bazaar at the end of 2014.