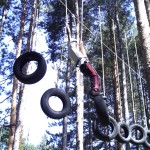 The most exciting event during this summer for 15 young clients of the complex (ages ranging from 8 to 18) was the adventure camp which we organized for them near the city of Teteven lasting from 4th until 7th September 2009.

Some of the youngsters had special educational needs and for most of the group this was the first time they had to be apart from their families.

We selected the destination and the route traveled with one basic idea – to immerse the urban youngsters in the world of nature and show how human history had impacted on it. When visiting a variety of important sites, i.e. passed on a subtle conservation message, while encouraging the type of full frontal engagement that improves coordination and manual dexterity.

The first stop was The Monastery of Glojene, where we saw the hiding-place of Vasil Levski and wondered at the miraculous icon of Saint George.

In the aptly named adventure park “Adrenalin” all the group, irrespective of age and gender, received the unique chance to overcome their fears and to test their endurance. Have a look at the photos – you’ll get the message.

While in camp, fun, games and competitions came thick and fast to ensure there was never an idle moment. While exploring, we took into the main landmarks of Teteven, the covered bridge of Kolyo Ficheto in the city of Lovech and an enjoyed other entertainment prepared in advance by the adult supervisors. The grand finale was “The night of talent” which showed a huge palette of emotion and imagination – youngsters expressing their creativity in their typical manner – noisy and spontaneous.

The participants had the opportunity to experiment, to take responsibility, to demonstrate flexibility in making decisions. They were involved intellectually, emotionally, socially and physically. They learned new things on the basis of direct experience. All the youngsters discovered new positive qualities and talents for themselves, which were not even suspected they have. In the atmosphere of security, support and understanding they learned how to share their feelings, their thoughts and how to build a new positive attitude to the world around them and to themselves.