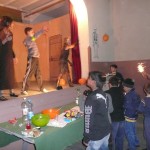 On 31st October, 2009 Equilibrium’s youth club introduced Halloween to the multiethnic child population of the village of Drjanovets.

With adult support from the secretary of the community hall, the mayoress and mum Galya, Annie, Pipi organised the scariest party ever seen this side of Transylvania. Competing for best costume, witches, spider queen, monsters and devils paraded on a stage decorated with hanging skeletons and black balloons. The 20 young participants were treated to cold punch with eyes floating on top and biscuits and cakes in the shape of severed fingers, ghosts, eyes and witch’s hats. Preschool actors recited poems; while the teenage buddies performed dances with anti-violence themes they had put together themselves.

After the wild party the children gently tested the local tolerance to new experiences such as the trick-or-treat game and – hooray – they got their first sweetie.

The party opened a whole new era in the village traditions helping the locals feel part of the big and multifaceted European community. 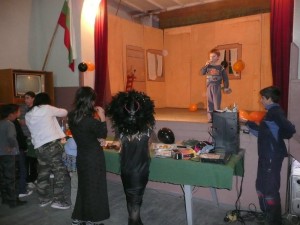 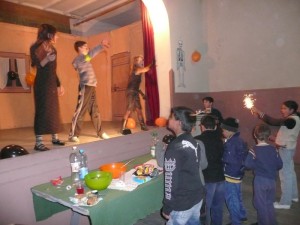