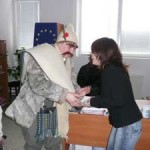 EQ is participating in an international project, part-financed within the Youth and Culture programme of the European Union.

Seven organizations take part – from Bulgaria, Greece, Romania, Italy and Finland and the main goal is the reinforcement of informal education and social interaction among young people in community centres or youth clubs. The project is designed to help move away from ad hoc youth activity and to give youth work, especially that undertaken among underprivileged youngsters, shape and purpose.

EQ’s research reveals that far too many of Bulgaria’s youth organizations are simply “going through the motions”, following prevailing trends and reacting to topical issues or recycling models developed by multinational charities that have filtered down to grass-root level.. This deprives youth work of ‘relevance’ – educational or social impact.

Bandwagons are jumped upon. By way of example, we discovered that the presentation of the theme of the EU often takes place in circumstances that are highly contrived. The subject of EC membership is often inelegantly attached to an alternative main theme – a sports event is flavoured with reference to the EC; an anti-smoking campaign is bedecked with EC-associated images.

In December 2007 the social welfare centre in Ruse was host to two consecutive two-day workshops for young people – one for underprivileged youngsters (mainly clients of the centre) and the next for a group from the prestigious English language school. Shortened forms of the workshop have since been delivered in two secondary schools in Ruse and Shoumen. Employing theatrical devices in combination with a multimedia backdrop, exploring Bulgaria’s development since the War of Liberation (1877-78) with a fair amount of irreverence and humour, stage managing a great deal of action EQ led an exploration of the significance of EC accession for the young participants.

A significant component of the workshop was a whistle-stop tour of Europe complete with improvised rail travel, border crossing, currency exchange and encounters with EC officials. The children excelled themselves when asked to play host to an EC delegation to their cities, their having been voted ‘European City of Culture, 2008’. Tour guide for the day was Bai Ganyu – the satirical character created by Aleko Konstantinov as an amalgam of all the worst Bulgarian traits. (Or is he?)

Numerous devices were employed to encourage the children to explore the issue of European identity and to understand the philosophical foundation of the European Community and the historical background from which it emerged (eg the European transition from empires to nation states,) The models will be added to a manual and incorporated in a website that will reflect the work of all the partners in this project who have been dealing with a variety of themes using informal, educative techniques. The manual will be translated into Bulgarian and disseminated by EQ. You can have a look at our teaching module presented in EQ Toolbox.