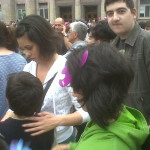 On Saturday 26th June, 2010 Ruse Carnival reached its climax. A team from the complex took a small group of children to take part in the traditional procession among masses of other children from the city.

The children had worked with our colleagues from Arena Media to prepare dolphin masks which they proudly wore.

Unfortunately, courage evaporated when it came to the time to step on stage and only the two bravest dolphins joined David and Tsveta Nenova (from Arena) in front of the crowd. Having said this, our kids were among the noisiest in the crowd and they occupied a privileged position close to the stage. Little VIPs.

The kids had a great time. Thanks to Arena, the team members – Eli and Georgi – who escorted the children and let’s not forget Gosho, our driver who did amazing things with a minbus to get close to the square and then helped ensure everyone got home safely.