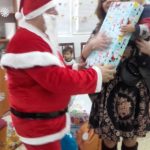 On the 20th of December, children and parents, clients of the Social Complex in Ruse, were eagerly waiting for an old man to arrive. But he was delaying, which brought some doubts amongst the children – did he had some troubles? Or did he decide not to come this year? … The GPS tracked his sled and it became clear that he was approaching and would soon be with us. Our host offered the kids to play while waiting for Santa.

So, the entertainment began with a Christmas crossword and then with wishes for the holidays. Fun games and entertainment followed – children, parents and specialists, divided into three teams, competed in making the longest decoration, the fastest jigsaw puzzle and playing their favorite children’s songs.

There were bells and deer hopping. Santa arrived and greeted the children, and they, in turn, greeted him with songs and poems.

The long-awaited moment for the gifts to arrive had come. The children were so excited and happy. There was a treat and greetings for a cheerful Christmas and a Happy New Year. 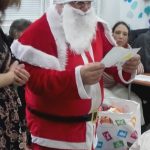 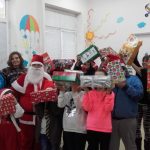