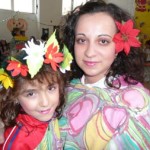 EQ has formed a tradition of staging a Christmas event for Ruse’s vulnerable children (recipients of social assistance). We must admit that it’s becoming a challenge to come up with new ideas.

This year, we were ably assisted by Ilya Devedzhiev, a professional entertainer who is an old friend of the team. He compered a highly theatrical event that involved both children and adults performing in a variety of sketches or tableaux that revealed intriguing and colourful traditions from around the globe. An enchanting, young Santa Lucia bearing candles on her head met roller-skating Venezuelans who swished past naughty Hungarians with shoes full of sweets and the odd birch twig (symbolizing the need for a good spanking).

There was a camel procession, geishas in ceremonial dress, Guatemalan children in beach shirts and – wait for it – the Viking gods Odin, Thor and Freya. This was a little bit of a departure from the main theme but artistic licence was taken for the sake of dramatic effect – Viking winter festivals are spectacular. We combined components of Up Helly Aa (fire festivals held annually in the middle of winter to mark the end of the yule season) with reference to other aspects of the pagan Yule-tide.

The dramatic culmination of the show was the burning of a Viking long-boat, an event tinged with regret as poor Krassi had only finished painting the sails twenty minutes before kick-off.

Fire jugglers did their stuff as the kids queued for banitsa and the traditional good luck tokens.

As always, it was great fun for children of all ages including special guests – some ex-residents of the Mogilino institution for children.