A charitable gesture for a child with special educational needs 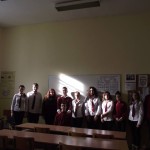 Teenage activists – students of the English Language School “Geo Milev” Ruse, have once again proven that charity is gaining popularity amongst young people and students, and finding new forms of expression.

This week, the Ruse complex hosted a meeting between the child and its parents, and the young people from the school. There was much enthusiasm on both sides: the child excitedly spoke to the older boys and girls and they parted with the promise of further meetings.

The funds were raised during the “Day without uniforms”, a school tradition that takes place once or twice a year. On this day, all students arrive at school without the compulsory uniform, having been informed in advance that they will be fined 1 lev for the misdemeanor. Under the initiative of the Student Counsel and with the support of the Director and the entire teaching staff, a choice is made concerning how the money will be used.

At the end of December 2013 the students had chosen to donate the money collected on the “Day without uniforms” and the School Christmas Charity Bazaar to someone with learning disability and the complex became involved.

The school did not want their gesture announced in the media. However, we are taken this opportunity to applaud a great example of teenage philanthropy. The money will be used to cover the costs of specialized rehabilitation.

We look forward to further cooperation between the school and the social services complex under our programme for volunteers – “Brave makers of good deeds”.