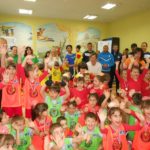 The project “Sport without boundaries”, undertaken by “Zora” kindergarten, “Equilibrium”, and CFC “Dragons”, provided children with special educational needs with a sports festival, which took place in the sports hall of “Zora” on 04.05.2016. The project was accomplished with the financial support of the Municipal Foundation “Ruse – city of free spirit.

The coaches, together with the kids, demonstrated exercises for warming up, as well as football skills. The children with special needs took part in the demonstration, too. They were encouraged to have contact with the ball and to participate in the activities under the guidance of the coaches, educators and psychologists.

The hall in “Zora” kindergarten was filled with parents and guests. The little football players were greeted by Elena Minkova – Executive Director of the Municipal Foundation “Ruse – city of free spirit” and Sasho Shterev – Head of the department “Education, Youth Activities and Sport” of Ruse Municipality. The headmaster of “Zora” kindergarten shared her excitement about the festival, and noted that the event is part of a series of initiatives dedicated to “Ruse – European City of Sport 2016”. She announced that there would be another sports event organized by “Zora” that would take place on 18.05.2016. 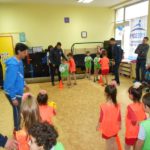 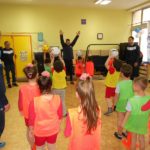 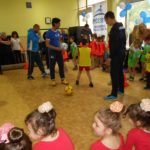 The aim of the project is to support the kids with special needs from “Zora” to help them participate according to their potentials and help them encounter new positive emotions connected to action and sports activities. The coaches and the kids from CFC “Dragons” give a helping hand to the children with special needs during regular sports events.

The young players had great fun during the festival and were delighted by the sweets and the medals they were given for their participation.