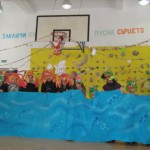 Christmas is a time for giving and it is customary for the team at the complex to distribute ‘shoe boxes’ to our young clients containing gifts from overseas provided by the generosity of the Samaritans. This year, we ramped up our campaign and here is how it happened…

So we did just that. Eli put together a campaign proposal, Galya provided the final touches, it was submitted and it won us the funding that allowed us to embark on the Great Quilling Adventure.

Quilling is a craft technique that originated in the monastic communities of the Middle Ages during which time scribes would coil thin strips of paper into loops, circles and other shapes with which to decorate their religious manuscripts. Eli introduced the craft to the complex and others have developed an enthusiasm for the activity so as to provide a variety of styles and variations.

For days on end, the staff of the complex took turns to lay aside their year-end form filling and to join children’s groups in the art room using their ingenuity and clever fingers to create an extraordinary array of Christmas cards to be sold to the public. Even David joined the throng which was brave as a distinct whiff of Girl Power hung over the proceedings.

But, thanks to Girl Power and childhood enthusiasm, we produced a stock of over two hundred cards which were ‘marketed’ using Dessi’s Facebook skills and the support of media partners. We actually started selling before we’d finished producing. Tsetso, the therapist who supports the Pink House, took cards to sell to his private clients and Doichin from the Parnas publishing company took cards to sell at a trades fair in Sofia. A clock decorated by Eli was bought by Hristo Karachorov, a local restaurant owner and cards were being bought faster than we could produce them. At this rate we wouldn’t have anything left to sell in Ruse’s central square. The municipal authority had kindly provided a hut in their ‘winter village’ – a festive market-place that dominates the centre of the city from Christmas through until the spring festival of Baba Marta.

Staff manned the hut from 20th to 22nd December after the deputy mayor, Encho Enchev had come to buy the first card. Krassi Todorov, a good friend of EQ, provided a variety of his hand-made wall hangings and paper-weights and the Bulgarian Young Mothers’ Federation kindly contributed more stock.

Our sales target was 600 leva. At the time of writing we have achieved a total of almost 750 leva used to buy 130 small gift bags plus cake and refreshments for two events at the Ruse complex in the lead up to Christmas. The larger event was hosted by Ilya Devadjiev and Stefania Masotti (friends from Arena Media) who had coached some of ‘our’ children in the production of a delightful piece of theatre based on the fable of the little crab who decides not to walk sideways. Games followed the drama and a great, big cake marked the grand finale.

Forty of the gift bags were distributed to children in the village of Dryanovets after a Christmas Eve concert planned and presented by EQ’s junior team (average age about 12).

Sarah Akroyd, a UK fundraising expert and friend of EQ gained access to 1400 copies of ‘The Magic Sleigh’ by Cynthia Paterson that has recently been translated into Bulgarian. These will be distributed to young clients of the complex, kindergartens and children’s groups over the next few months.

Meanwhile, down in Teteven, representatives from the Bulgarian branch of the Sandvik Engineering Group attended an event that shortly preceded the Bulgarian Council of Minister’s official declaration of the closure of the baby home. Gift packages bought with the generosity of the company’s employees were distributed to those children who previously occupied the institution and their peers. The company also provided furnishings for the new centre of social support that started operations on the first working day of 2011.

The Ruse venture was a very successful team effort that involved the mobilization of the local community around a very simple idea and we are enormously grateful to our many supporters. The generosity of corporate sponsors added the icing to a very special Xmas Cake. We plan to sustain the fundraising momentum by conducting similar campaigns at intervals in the future. If you need a Mothers’ Day card that’s just a little bit different, you know where to come.