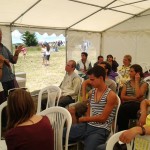 Equilibrium and Dreams and Teams have had a relationship for several years that grew out of the support both organizations provided to the British Council’s Connecting Classrooms project.

Our shared devotion to adventure and outdoor play means that we have both made child-oriented contributions to the Uzana Polyana festivals devoted to ecological responsibility and protection.

During 2014, David was privileged to contribute directly to a Dreams and Teams project. Returning to Bulgaria from Scotland late on a Saturday night, he departed for Gabrovo early in the morning of Sunday, 21st September to give a presentation in the context of a forum dedicated to the subject of progressive informal education.

In our recent 10th anniversary film produced by Arena Media, David expresses his heartfelt belief in the uniqueness of every child in terms of personality, temperament, intelligent profile and life experience. This echoes statements made at the Gabrovo forum and while presenting Equilibrium’s style of child participation as a contribution to a programme undertaken by the National Network for Children – “We work with children at risk. Common factors include educational disadvantage and patterns of challenging behaviour. However, the one thing that I can say with total confidence is that the one thing all the children have in common is the fact that each one is different.”

Advances in neuropsychology and learning theory add credence to the opposition to standardization in formal education and the institutional emphasis on conformity. The psychologist, Howard Gardner argues that there is no rational basis for teaching and assessing individuals in an identical way. Important ideas, topics, theories and skills ought to be taught in more than one way and – while being assessed – students should be able to communicate their understanding in more than one way. Sir Ken Robinson argues that creativity is every bit as important as literacy. He believes that “(i)magination is the source of every form of human achievement. And it’s the one thing that I believe we are systematically jeopardizing in the way we educate our children and ourselves.”

Thanks to Dreams and Teams and the National Network for Children, 2014 was a year in which we repeatedly and emphatically expressed Equilibrium’s dedication to these principles and explained how, even if none of the children we work with will ever make it to Harvard or Cambridge, they each have talent. Our job is to help them find it.