Throughout 2015, an EQ team has been working with families in two Roma districts in the context of the project “Confident Parents of Successful Children” funded by the Trust for Social Alternative.

We took the opportunity to stage festive parties complete with Christmas trees, varied entertainment and games. The important thing was to bring three generations together in a context that allowed the children and young parents to reveal what they have learned during the project….with a big accent on shared play.

During 2015, we had hosted group sessions that focused on play and ways of interacting with children that promote their development and assist the preparation for kindergarten and school. We focused on story-telling and engaging the child’s imagination and this extended to using every-day materials to make toys, mobiles, rattles and pacifiers for babies. We also covered important aspects of healthcare for mother and child before and after childbirth.

The informal sessions were well received by all participants ensuring a spirit of collaboration and partnership between EQ team members and families and a shared focus on the success of the child.

Some of the children had never met Santa Claus. This year, they had the opportunity to have photos taken of them receiving gifts. The photos have been distributed to the families.

The project has ended but  EQ  will continue its work in the two neighbourhoods especially as demand for our workshops has increased. 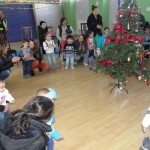