The story of Bobby: the power of love and care 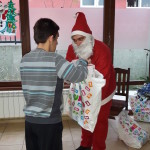 This is the story of Bobby. He’s now 25. In May 2014 he was transferred to our small-group home called “Hope” from a large residential institution for children with intellectual disabilities. The story is one of remarkable progress. Bobby has changed physically, emotionally and psychologically. 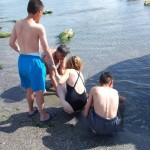 The first time we met Bobby (while he was still in the institution), we had to assess his capabilities and take these things into consideration when planning the transfer. Bobby was passive and – if he reacted at all – his reactions were delayed. He could walk unassisted but was slow and apprehensive. According to the staff, the only person with close ties with Bobby was his grandfather who told stories about Bobby running and kicking a ball during his early years spent at home. This was difficult to imagine. The young man we saw in the institution appeared to suffer from quadriparesis. Muscular  dystrophy had weakened all his limbs but his legs especially.

In the early period after his transfer to the new environment, Bobby spent most of his time motionless and he seemed afraid of everything and everyone.. He panicking when he had to take a bath and when forced to be socially and physically active. However, with gentle encouragement that included singing songs that featured his name – “Bobby…Bobby”  – the carer team learned to engage his attention and gain his cooperation.

Trust has been built over the last year and a half. It turns out that he can walk and kick a ball. In fact, playing with balls has become his special activity. He knows where they are kept and likes to have them arranged in order.

As a result of the new care regime and supportive environment, Bobby has started to use words instead of making sounds that forced people to guess his desires. He enjoys his visits to the day centre

Bobby took part in two camps during the summer of 2015 – big adventures that impacted a great deal on his behavior. In the forest park in Nikolovo it became obvious that Bobby loved the outdoor setting. He collected pine cones. He listened to the birdsong. We, therefore, had few qualms about taking him to the seaside. He had never walked on sand or seen the sea let alone paddle in the waves.

. During the autumn his grandfather paid a visit. It was clear that years of separation had failed to put a dent in the emotional bond they share. Bringing about the reunion was something we had to think about carefully but since the their first encounter when he welcomed the old man with the word “Grandpa” things have gone from strength to strength. There have been many visits to the small-group gome and, at Christmas, Bobby visited his grandpa’s home where he had lived when he was a little boy.

Bobby’s development has been remarkable. He is Keeper of the Balls. Alluding to violence and abuse he suffered in institutional care he puts his fist to hi chin and tells us he is “not afraid” any longer. His fear of falling, slipping or climbing stairs gas dissolved. His social routine involves the day centre and EQ events. He likes to sing and has taken part in an impromptu sing-along in the Mall Ruse during our Christmas bazaar.

The future looks good for Bobby showing that youngsters are remarkably resilient and adaptable. Leaving behind years of institutional care, a young man has a chance to be happy and fulfilled. He has friends and a social life. He has his grandpa back.