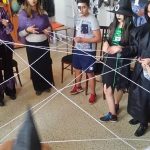 The children using the social services at the Children’s Street Center and the Children’s Rights Center at the Social Complex of Ruse, celebrated Halloween, also known as “The Night Before All Saints.”

The date and time of the ward was clear and the children transformed into terrible creatures were expecting the party impatiently. At first they all became entangled in a spider’s web and introducing themselves, explaining what creatures are they and what powers they possess. In an interesting and fun way for the children, it was told about the tradition of people being masked on that day to drive out the evil spirits and why children go from door to door with the message “Trick or treat”. The kids learned about the story of Jack the Hammersmith, which is related to the tradition of the Halloween pumpkin lantern. In the form of crossword puzzles the participants also learned about the symbolism of the feast, which marked the beginning of the specially selected games with playful character: “Halloween limbo”, “collages”, “burst a balloon and do the task”, “mummies” etc. The games played were a lot of fun. At the end of the party there were delicious treats for everyone. 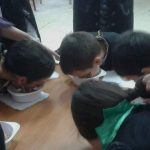 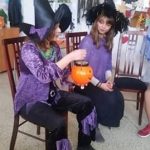 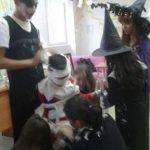