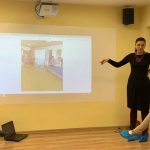 An informational conference was held in the family centre of Equilibrium on 12th April, 2019. It focused on the results and perspectives of Bulgaria’s First Interactive Family Centre “In the world of early childhood” which was created under a project funded by the Velux Foundations.
David Bisset – the project manager – told the audience the story of the centre, inspired by the partnership with our Scottish and Swedish colleagues. More than 170 families have visited the centre since its opening in September, 2017. Free play and the interaction between children and their parents are the main principles behind our work. The external evaluation, done by Dr. Vessela Banova, reports an innovative approach of working with parents with a focus on the autonomy of children and their ability to cope with various situations which help them learn and discover the world. The contact with the experts in the centre is informal and unburdened by hierarchal or bureaucratic barriers.
A new Equilibrium project was also presented at the conference. It builds on and extends the operation of the first project. The project “Reform of Early Childhood Education in Eastern Europe – Bulgaria” is undertaken in partnership with VIA College – Denmark.
Two pilot kindergartens – “Snejanka”, Ruse and “Bratia Grimm”, Sofia – are involved in the project. They will try to adapt Danish practices in Bulgarian early years’ education.
The director of “Snejanka” – Ekaterina Ivanova – gave her impressions and showed some photographs from the study visit in Denmark. The difference between the Bulgarian and the Danish systems is huge but not insurmountable. Ekaterina and her team are inspired to introduce small changes step by step in the environment and approaches of “Snejanka” kindergarten. One of the first steps will be the alignment of the teacher – child level/position, e.g. the teachers to be physically closer to the children by sitting on the ground. The next step will be oriented towards change of the kindergarten interior so that various corners are identified, where the children will be free to choose their activities and they will be left to play more.
Over the space of 3 years, the project will provide 24 trainings for the pedagogues from the two kindergartens, done by educators and experts from Denmark who will help them introduce the desired changes so that kindergarten activity takes better account of the stages of early childhood development and the needs and potential of every child. 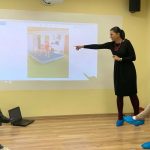 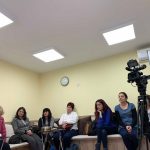 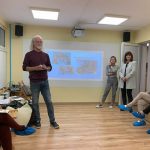