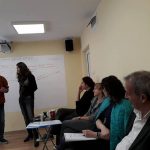 At the start of April, Equilibrium brought together a small group of professionals with a shared interest in early years’ care and education.

The venue was our early childhood centre in Ruse and the event was deliberately given a fancy and grandiose title – “International Symposium: Early Years’ Education – Play & Interaction = Enchantment” as a tongue-in-cheek method of concealing how the actual activities would unfold.

Participants from Bulgaria, Bosnia, Moldova and Ukraine soon discovered how Equilibrium believes that an effective method for reinforcing the message that play promotes healthy development in young children is to encourage adults to set aside the inhibitions they have accumulated over the years and to throw themselves into creative play.

The play-leader was David Bisset. During the first day, he somehow combined providing detailed information on brain development with challenging several teams to create and perform songs for children drawing inspiration from the title of the Frank Sinatra hit from 1964 called “Fly me to the Moon.”

On the second day, he teased the (mainly female) audience by asking those who though they were good at multi-tasking to raise their hands. He then asked whether audience members thought women were better at it than men. Using research undertaken by American neuroscientist Daniel Levitin (and others), David explained the serious negative implications of the contemporary preoccupation with multi-tasking.

In modern complex society, many factors combine to deprive young children of rich and varied opportunities for play and exploration. The implications are serious. Styles of parenting and educational approaches should not contribute to the difficulty.

This represents the first of a series of short workshops on early years’ care and education. Some will be hosted at the Ruse facility but we will also make use of the opportunity to visit those locations in Bulgaria and its neighbouring countries where our working partners operate. 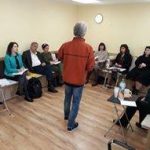 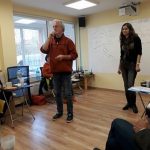