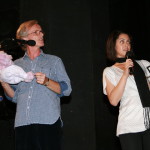 David, Eli and Lyuba hosted an event in the theatre next to the Ruse’s music school.

The evening was designed to mark the culmination of the ambitious foster care campaign orchestrated from the social services complex that has seen small teams travel the length and breadth of Ruse region and give presentations in 30 different towns and villages.

Eli, our communications coordinator, gave a powerful talk that both demonstrated the scale of our undertaking that started back in February and the daunting task that remains to be fulfilled. By way of example, Eli quoted extensively from a draft concept paper taken from the literature of the National Children’s Network that outlines the likely steps of a national action plan for the closure of the country’s 32 baby homes. The country needs 700 foster families to support the process together with a framework of integrated services preventing the abandonment of infants, supporting vulnerable families and providing alternatives to institutionalisation for those children who have to enter the care system.

David wielded his guitar while far younger and more gifted musicians – Vihren and Elena – provided a haunting musical accompaniment to the images and messages shown to the audience. Lyuba acted as both photographer and laptop operator.

We are pleased to say that most of those personnel who took part in the campaign were among the audience. David applauded their efforts and emphasised the part played by the various child protection departments.

We’d like to thank the music school for both the use of the hall and the important technical support provided. Our partners at the Open Society Club helped with publicity and we are grateful for their contonuous support to our ventures.