Opening an innovative playground in Sofia within an Equilibrium project 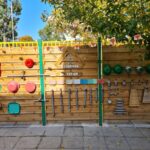 Yesterday – October 25 – an innovative playground was opened in the Kindergarten “Brothers Grimm” in Sofia under the project “Reform of Early Children’s Education in Eastern Europe – Bulgaria”. Equilibrium works in in partnership with VIA University College, Denmark and the project is funded by the Villum Foundation, Denmark. The project started in January 2019 and, yesterday, was its symbolic end. However, it represents a new bold start for the children, parents and educators and we hope that it will serve as a model for reforming kindergartens throughout Country.

The overall objective of the project is to stimulate national awareness of the importance of high quality in early childhood education. This should be achieved by creating modern pedagogy and developing a  rich environment for preschool learning undertaken to provoke reform and create awareness among key stakeholders and national media. Project actions at the pilot Sofia kindergarten have had a significant transformative effect so as to create a demonstration model.

The project started with a visit to Aarhus in Denmark that allowed Equilibrium team members and kindergarten personnel  to get acquainted not only with the successful Danish model of early-years pedagogy, but also to be immersed in the practical reality within nurseries and kindergartens: the care and learning environment and interactions with both children and parents.

This provided significant inspiration for the Brothers Grimm team, but the change would not have been possible if it had not been supported by over eight interactive teaching modules delivered by a team of specialists from VIA College over a period of three years. In parallel, the outdoor area was transformed creating a space for games and adventures of children employing natural materials and  new adventure-oriented approaches.

The exceptional motivation of the kindergarten team to apply the Danish counterparts has led to many changes in the overall appearance of the kindergarten, both as an environment and in terms of new interaction with children. Here are only some of the results achieved so far, shared by the Grimm Brothers team:

At mealtimes, the children assist with preparation and self-service.

The change is now actively involved in the preparation of the dining table, the self -serving of the food by the children, the use of bowls and dishes, from which the children themselves spill their food and jugs, from which they pour water and tea themselves. They continue to serve and help clean up after eating.

We make a big effort for children to play outdoors. So far, we have provided an array of toys and have used sandboxes, balls and hoops. In addition, games are organised.

The nature of the games has changed dramatically. Irrespective of the weather, we encourage children to play with sand, mud, water and natural materials. Children feel happy and free to study the world and their surroundings. This children’s freedom to play is the thing we most liked to see in Danish kindergartens and, following this example, we have expanded the range of outdoor activities and this includes outdoor snacks.

Music is an integral part of children’s daily routine. We listen to music appropriate for the age of the children, singing songs. We have also introduced classical music as background sound and calypso has become popular. This involves the use of percussion instruments (some of which we created ourselves) and it can incorporate both dance and fairly elaborate forms of choreographed movement and chanting.

We have bought various children’s musical instruments for the children to be available to the children at any time so that they can sing, dance and play when they wish. We improvise with buckets, kitchen utensils and wooden spoons.

During our visit to kindergartens in Aarhus, we were able to gather a multitude of inspiring ideas for changing the environment and our overall attitude towards the free play. We liked that almost every kindergarten had a book corner and widely dispersed activity areas that encouraged both sedentary play and movement.

The ideas of changes in the interior of the groups that include:

– Removing a lot of the curtains to improve the lighting

– Reducing the number of manufactured toys and prioritizing natural materials

– Employing the creativity of children in designing the interior

The other change we made is to set up the play areas in the classroom, taking into account the Danish way of arranging the groups. With small modules, we separated the spaces in the classroom and made the following play areas: shop, kitchen, hair salon and baby centre. In an adjacent room we made play units for (tom)boys with an accent on construction and building.

We believe that children in smaller groups play better, do not show aggression with each other and enjoy the activity.

Changes in the process of pedagogical interaction and communication with children were profound because it is a matter of change of personal attitudes.

In Bulgarian kindergartens we use a front-to-front method for interacting with children and often the teacher towers above the child. Now we all try to change our position in relation to the child. We try to be there for them and to be at their level (sitting on the ground or on a miniature chair next to them). We try for our contacts to be more literally face -to -face.

Work in all these areas continues to develop and improve as it becomes a natural part of daily life at the kindergarten. Guests saw a lot of it in action.

The playground was explored by guests after members of the VIA and Equilibrium teams had briefly explained the project’s core ideas. Among the guests were preschool educators who expressed the desire for the model to be carried into their workplaces. This will provide both opportunities and challenges for pedagogical teams but the benefits for staff, children and parents are self-evident.

Equilibrium partners – Arena Media – are working on a demonstration video that will soon be available for distribution.

Working with our colleagues from Brothers Grimm, Equilibrium hopes to influence the style of early years’ education through practical demonstration of new techniques developed through the commitment of the kindergarten team and their love for the children in their care. 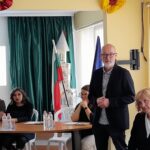 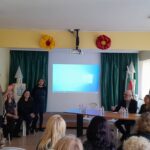 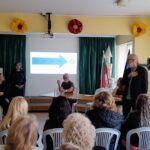 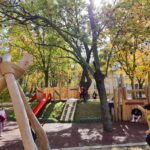 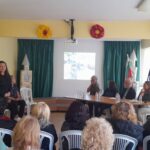 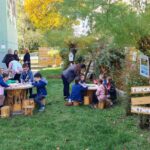 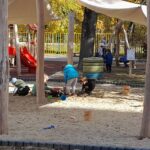 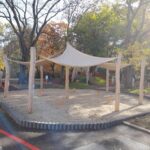 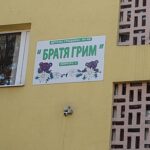 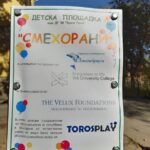 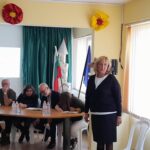