She met her family again after 21 years 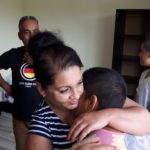 Silvia is 21 years old, with schizophrenia, severe mental disability and behavioural difficulties. She was born prematurely and the prognosis was bad. She has never been raised in a family environment.

In 1998 the mother signed a declaration of refusal in the presence of a notary and agreed for her child to be entered in the Register for Adoption. From her birth till the age of five Silvia was in the Mogilino institution in the Ruse region. After that she was placed in a Home for Children with Mental Disabilities in the village of Mihaltsi, Pavlikeni Municipality, because she lagged behind in her neuro-psychic development. After she was 10 years old Silvia was placed in a Home for Children and Young Adults with Mental Disabilities in the village of Prostorno, Razgrad Municipality. On 8th May, 2014 the girl was transferred to the family-type accommodation “Love” in Ruse under the project “Our Children Are Our Responsibility – Opening of a Complex of Residential Services for Children and Young Adults with Disabilities Ages 3 to 18 in the Ruse Region” with a beneficiary: Ruse Municipality. The main reasons for the transfer of Silvia were the close residence of her parents and the development of the social and medical services in Ruse. 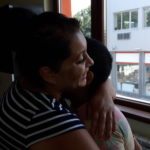 On 21st May, 2016 Silvia’s mother met the manager of the small-group homes “Love” and “Hope” on Facebook. They had an extremely emotional online conversation. The woman confessed that she had been living and working in Germany for many years and her whole family – her husband and two children – were there. Excitedly, the mother said that she had tried many times to find where her daughter Silvia was through different institutions. She asked many questions which answers she was looking for all those years. The manager told her in details where her daughter was placed, in what conditions she lived, who took care of her and how she felt emotionally and physically. The mother shared with bitterness that some years ago when she wanted to visit her daughter in the institution the director didn’t allow her in order not to upset Silvia and to avoid a crisis after the mother’s departure. The mother said that the man she lived with in Germany was Silvia’s biological father and they both wanted to take care of her in the future. She asked to be sent pictures of her daughter and the team fulfilled her desire. In her words, they had to come back to Bulgaria in August, 2016 and she promised that she would call and visit Silvia. After that conversation the mother was very thankful, satisfied and confident about the future.

On 8th August, 2016 the girl was visited by her parents and her two brothers. The meeting was extremely emotional and not only for the family but also for the staff of the small-group home. Silvia’s mother burst into tears, hugged her daughter and said that the girl had changed – she seemed to be feeling much better and she had put  some weight on since she last saw her. The parents confessed that they would like to take care of their daughter but the circumstances didn’t allow that at that moment because they lived abroad. They promised that they would visit her every time they come back to Bulgaria. A couple of days after she met her parents, the girl went on a summer camp in Lipnik Park, Nikolovo. There she said the word “mum” many times. After she came back from the summer camp, and before the departure of her family, they visited her again and brought her many presents. The mother found it very hard to say goodbye to her daughter and promised she would visit her when she came back.

On 9th October, 2016 Silvia’s mother contacted the manager again and asked for more pictures of her daughter because she was making a photograph album.

The girl often says the word “mum” and sometimes chooses to put on the clothes her mother brought her. Is it a coincidence or did she really feel the special bond with her family, which we cannot replace?