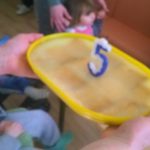 My name is Joana and I am the mother of Alec, a child that his father and I were looking forward to having with lots of love and apprehension.

He was born full term on 17th February, 2012 in the maternity ward in Byala and delivered by Cesarean section. I will not mention the name of the doctor who looked after me during pregnancy. Three hours after his birth Alec was admitted to the Neonatal Unit in Ruse. The doctors didn’t offer any hope for his life but he was a warrior and with the help of God, after nearly two months of struggle, we were discharged with a diagnosis – Neonatal cerebral ischemia, inborn kidney deficiency and other disorders. Due to his health condition he was admitted for treatment in the Home for Medico-Social Care for Children in Ruse. It was impossible to take care of him in a home environment until his condition was stabilized. We were under a great deal of stress and we didn’t know when we were going back home. We sought information every day, we visited him once a week, sometimes – every day. We brought him clothes, diapers, toys but they weren’t used. But the nightmare continued – a month in the Home for Medico-Social Care, a month in the baby unit – his condition worsened. They started to advise us to forget about Alec, we were young, we should have started to think about having another child. No way was this going to 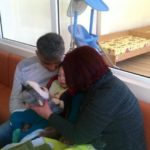 happen – he was our child, and not a doll you can choose or discard. The seizures wouldn’t stop, he didn’t have any chewing, sucking or swallowing reflexes, he wouldn’t stop crying, he didn’t put on weight, he couldn’t see, he didn’t develop. We were sent to see a consultant in Sofia. The professor said that it was a cerebral palsy 100%. “It will be very hard to feed him“- he explained to the nurse. “Tube-feeding only!” We were admitted again in the baby unit in Ruse and Alec was in a very serious condition and after a month he was sent to Pirogov – the Pediatric Thoracic Unit. He started to be fed through a gastro stoma; otherwise he was condemned to hunger. The treatment lasted a month. Everything was fine. From 4 kg at the age of three he is now 10 kg. We are lucky because from then on Equilibrium has been present in our life. I don’t want to remember and talk about our three-year life in the Home for Medico-Social Care because it hurts. In February he was admitted in the new service Centre for Family-Type Accommodation. With so much effort and spoon by spoon Alec started to eat; now we are waiting for a consultation with an orthopeadist so we can find out if he can be seated and start to taste food again. We found friends for life here – real people with big hearts. We are glad they became part of our child’s life. The environment in which Alec lives is close to the family one and the conditions are great. There 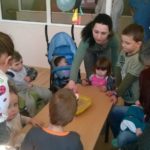 is cooked food every day, the staff works with him and he is always taken good care of with real love. On 17th February, 2017 we celebrated his 5th birthday with songs and among many children. Here we are calm and this is the most important thing for us, the parents, because we can talk to experts and be understood.

We are thankful to the people who, with great efforts, take care of our child. We wish the staff of Equilibrium lots of health and to remain dedicated as always.