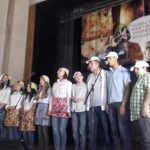 On the first of June, children using the social services of the Complex managed by “Equilibrium” took part in a festival organized by the Center for Civil Support and the municipality of “Dve Mogili” – “Orlova chuka singing and dancing, different but together”, which is held for the second consecutive year.

For this day, the children began their preparations from the beginning of May – they made a selection of songs, poems and dances with which to participate. The desire of everyone was to perform very well, to win the audience’s sympathy and cheerfulness. To achieve that goal, they rehearsed for days. The long-awaited day came and their work was rewarded.

The youngest six-year-old participant in the group recited the “The Kindergarten ended” poem, reminding everyone that after the upcoming summer time comes schooling. Worn with aprons, headscarves, and wrists, the performers took over the scene and hearts of the audience with the songs “Listen to me, Dilmano” and “Djore Dos”. The graceful ballet performance on the melody of the song “Prituri se planinata” won the audience’s sympathy. The children received a certificate of dignity and individual gifts. They were also included in animation-based entertainment. A visit to the “Orlova Chuka” Cave was next. The children visited the open galleries and an employee told them in an interesting and fascinating way about the history of the cave and its inhabitants. Even the steep steps and fatigue did not darken the happy smiles of the cave-adventure experience.