Toddlers went on a bear hunt in the Ruse Complex 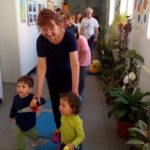 Deep cold rivers, big dark forests, swirling whirling snowstorms… It sounds dangerous and scary but in fact it is exciting and joyous. What is it all about?

We were going on a bear hunt.

The mums and kids from the mixed-ability playgroup for babies and young children shared this adventure on 11 May. The idea is based on Michael Rosen’s prize-winning book “We’re Going on a Bear Hunt” – one of the most influential books for young children published in the last 30 years. 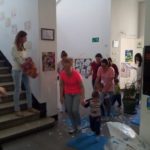 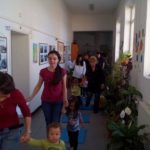 The EQ team surprised the mothers and children with their interpretation of the story in an original and interactive way. The little “bear hunters” walked through swishy-swashy grass, deep cold water, thick oozy mud; they wove through a big dark forest; survived a swirling whirling snowstorm before they reached the narrow gloomy cave, where a shiny wet nose, two big furry ears and two big goggly eyes turned out to belong to a bear. But the children were not scared at all because their mothers were there and because little Goshi is brave and frightened the bear with his toy rifle.

Well, after that everybody ran back and hid together under the duvet. They are all ready to go hunting again but for some smaller and harmless creature.

Similar excitement takes place at the playgroup every Wednesday morning. The playgroup is the space in which, with the help of the parents, the EQ team develops, applies and experiments with new approaches in the field of Early Childhood Development.