On 29th and 30th April, Velux Foundation hosted a conference designed to identify best practices in combating the results of poverty and social marginalization of the Roma population in South Eastern Europe.

The event brought together organisations from Bulgaria, Romania, Hungary, Slovakia and the Czech Republic whose work brought them in direct contact with the Roma and whose experience enabled delegates to identify key issues and common patterns (things the that various countries have in common) while also providing a broad range of perspectives.

The venue was the Cherno More Hotel in Varna and Equilibrium was represented by Galya and David Bisset.

Before participating organisations gave short presentation on their work, participants listened to keynote speaker Liviu Matei, , Professor of Higher Education Policy at the School of Public Policy at the central European University in Budapest. Professor Matei charted developments in the situation of the Roma since the fall of the Berlin Wall concluding that progress had been made but – arguably – too little was happened too slowly and there was scope for arguing that structural discrimination was a barrier to progress.

As a provider of social services and a major contributor to the deinstitutionalization programme in Bulgaria, Equilibrium has long and varied experience of working with the Roma minority in Bulgaria. Most recently, we were asked by the local authority in Ruse to provide technical support to a project that involved substantial contact with inhabitants in three Roma neighbourhoods in Ruse. Equilibrium’s work in these communities started in December 2015 and has continued until March this year.

While the original focus was on maternity, reproductive health and aspects of early years’ care, David’s short presentation to the conference participants was designed to introduce a short film – “Parenting Creatively” – made in the districts of Selemeyto and Sredna Kula. The title alludes to the way in which Roma families have become part of the “parent community” served by our early years’ centre. The film focuses on adult-and-child play sessions and these are a key feature of the centre’s work with ALL families.

David mentioned a new body of research from the USA where there a substantial Roma communities. The focus in on the resilience of minority peoples who suffer deprivation and marginalization. It has been discovered that compared to indigenous groups (Native Americans and Alaskan Innuit) and certain inner-city communities, Roma show a contrasting level of resilience and endurance and there is growing interest in the aspects of Roma culture and value systems that provide these qualities.

David referred to Equilibrium’s focus on play as a key component of Developmentally Appropriate Practice. The long-term implications of failure to provide children with rich and varied opportunities for free play and becoming increasingly clear and as our tendency to pile pressure on children at a younger and younger age forcing them to concentrate on external sources of motivation most especially in the context of education and preparation for employment.

If we are to take a strength-based approach to supporting Roma communities, why not focus on this resilience and discover where it comes from? 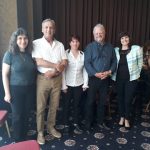 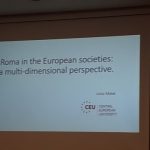 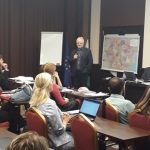