Equilibrium is very grateful to all of the people of Ruse who chose to buy martenitsi from ‘The Spring Tree’ of the Social Services Complex.

We sold over 2500 martenitsi, cards and also launched our newest product – the eco shoulder bag manufactured for us by students from the city’s school of fashion and design.

By raising almost 1300 leva we can continue our tradition of providing summer camps for children and we’ve started talking to other organisations about supporting the participation of youngsters in an ecological and cultural festival that takes place in the mountain resort of Uzana.

The campaign was successful thanks to the work, imagination and the support of many children, staff, friends and partners of Equilibrium including our adoptive parents group and volunteers who were busy for over two months and continued their efforts during the campaign period because demand was so high.

The campaign was supported also by the municipal and regional authorities – we were given free use of sales kiosk by authorisation of the mayor while the martenitsi distributed to the staff in the regional governor’s office came from the social services complex.

Young clients of the complex met Baba Marta (yes, the real Grandmother March – we found her in a retirement home for mythical creations). The children’s theatre group ‘Camila’ performed ‘Why Baba Marta is Angry’ by Iliya Devedjiev. However, we would like to repeat that our Baba Marta was the real deal. The others are men dressed up.

There are a number of customs linked with the Baba Marta folk festival and these were given a comic twist as the young audience joined the action. Symbolically they cleared ‘the house’, raising dust (and quite a bit of noise), threw small red rags into the air, decorated a painted tree with spring flowers, and finally, of course, distributed martenitsi to all and sundry.

Equilibrium has a fruitful relationship with a youth group in the village of Dryanovets near Razgrad. In the introductory chapter of our publication on child participation we refer to some of the products of the relentlessly active imaginations of these youngsters (see EQ Publications – ‘It’s Child’s Play!’ for the full text). Between 1st and 4th March, with the blessing of the mayoress, some teenagers from the group helped interpret an exhibition designed for the senior citizens of the village who frequent the pensioners’ club.

The exhibition was a reinterpretation of something EQ did back in 2008. Here is an extract from the text referring to that earlier event –

‘During a seminar, Equilibrium’s chairman had shared a joke with schoolchildren and announced that Britain has martenitsi just like Bulgaria. The parallels between ancient Bulgarian practice and Celtic ritual preserved in Britain and Ireland are striking. Many ancient civilizations saw symbolism in the pairing or red and white. Today, tribal societies continue the practice. The colour symbolism is found in established religious practice and, indeed, it has evolved to become part of contemporary popular culture (although we may not always recognize this). The exhibition explores the entire theme from ancient times to the modern day.’

The youngsters did a wonderful job of interpreting the images and texts while distributing refreshments and EQ-martenitsi.

Programmes like this one depend heavily on the imagination, goodwill and commitment of a large number of people to whom we are eternally grateful. 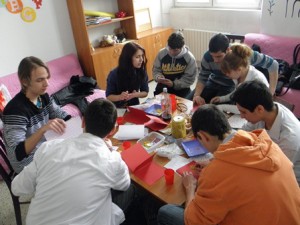