A session on drama therapy at the Ruse Complex 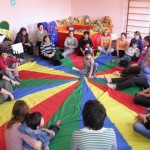 On 21st March, 2012, we were lucky enough to be visited by our good friends from the British organization, Frontline, who introduced us to Paul Bamlett, the director of Actability, a theatre company that specializes in providing opportunities to those with learning disabilities to participate in the performing arts.

Equipped with a multi-coloured parachute and a vivid imagination, Paul led a session of boisterous play in which several of our staff participated as did six of the children from our small group home – the Pink House.

Paul has worked with children and adults with a wide range of disabilities including severe autism and his techniques – based on the principles of sensory stimulation and mimicking the actions of a leader – are highly effective. We recognized this for ourselves from the happy responses of the children.

Great fun and we learned a great deal. Thank you, Paul.