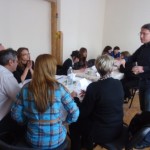 On 4th April, 2012 David Bisset and Elitsa Velikova joined other members of Ruse’s social welfare community and representatives of the business community in an event organised by the Foundation for Social Change and Inclusion (FSCI).

Representatives of the foundation provided information about their programme in Gabrovo that provides accommodation and mentoring support for young adults who are socially vulnerable because of their upbringing in an institution. They described their desire to replicate the model in Ruse.

This model entails accommodating teenagers in an environment that provides an opportunity for a style of semi-independent living (houses of opportunity). Mentors are on hand to provide support and supervision. The support is quite wide-ranging – instilling domestic and job-finding skills, social support and, acting as intermediaries with officialdom. An important element of the Gabrovo initiative is the creation of strong working relationships and continual dialogue with a support network from the educational and social welfare sectors, the employment agency and local employers.

The Gabrovo house of opportunity is the showpiece initiative of the FSCI, an organization that works for social development and inclusion of disadvantaged individuals, groups and communities. The organization hopes to create a network of houses of opportunity for young adults who have grown up in institutions as a means of transition into independent living in a world that they often find forbidding an confusing.

The Baba Tonka House in Ruse was set up under this scheme in June, 2011 with the support of a British organization – the Trussell Trust – and the discussion group was organized in order to build bridges between the service provider (FSCI) and potential local collaborators including the Centre for Social Support of Children and Families managed by EQ.

David and Elitsa contributed to the general discussion that covered a variety of topics that included the vulnerability profile of a typical care-leaver, shortcomings in the current support system and existing and proposed initiatives for creating more employment opportunities.