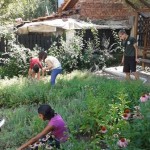 As part of the activities in the summer programme of Ruse’s social services complex, the children received a formal invitation from the Regional History Museum to visit the herb garden in the museum “Zahari Stoyanov” to learn about the herbs.

They were invited having already shown an interest in herbs during participation in the lead-up to the Charity Bazaar organized by the team at the complex.

“Zahari Stoyanov” is located down by to the river and on 18th July Durhan and Petya led the group armed with scissors and bursting with enthusiasm. Theodora – the curator – explained how the herbs are arranged according to the direction of the sun.

The children learned that sage that you see before you is an herb for centenarians and besides being a beautiful flower, cures any disease. They were introduced to mint, thyme and lavender and Learned that you have to drink echinacea when you are ill because it boosts the entire immune system.

The children worked hard and gathering and packaging the various herbs ready for charity bazaars that are now part of the tradition at the complex so as to raise funds for their special -interest clubs, summer camps and outings. After the work, they plucked plums from the tree in the courtyard and picnicked before returning to the complex each with arms full of herbs.