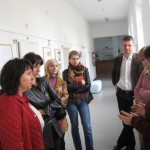 During September 2008, EQ played host to a group of visitors to Bulgaria representing the operational presence of “Hope and Homes for Children” (HHC), an UK registered charity, in Moldova and Transnistria. During their visit, the delegates were to visit three facilities representative of local best practice in child care – the Ruse and Shoumen complexes for social services for families and children and the Karin Dom Foundation in Varna.

While visiting the Ruse centre accompanied by Dessislava Encheva (its director) and Galina Bisset, regional manager for HHC, David provided an introduction to EQ’s repertoire in the field of education and explained how this overlaps the work of HHC in the sphere of closing institutions, establishing small group homes and the develop of models in foster care. Institutionalization is a frequent cause of learning difficulty. It became evident that state education in post-Communist Moldova shares the shortcomings of the Bulgarian system. The following were emphasized –