Advances in early-years’ practice – working with Edinburgh University in Scotland 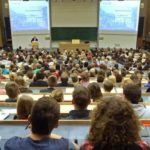 During April, David and Anna Bisset participated in a conference in Edinburgh University entitled “The Revolution of Early Childhood Practice”. Anna is studying to become an occupational therapist. If the new project is to have a significant impact, it is important to influence young people like Anna,

They also spent two days working closely with the team at Cowgate Under  5s’ Centre in Edinburgh. The centre is considered to be one of Europe’s leading kindergartens using methodology based on the teachings of the 17th century educationalist Friedrich Froebel that coalesces well with contemporary developmental psychology and learning theory. David and Anna visited both the city centre kindergarten and an area where the children are taken for outdoor adventures in a forest just outside the city.

Equilibrium plans to open a new facility at the end of the summer. A special team will work interactively with families, educators and childcare professionals demonstrating ways of working with young children that are developmentally appropriate and in line with the most progressive practice in Europe and North America.

Team members are working closely with early years’ practitioners and academics in Scotland and Sweden. Participation in the event in Edinburgh enabled David to establish a strong working relationship with the academic team at the university and to meet other leading academics and practitioners from the UK who have pledged support for the work in Ruse.

Partners from both countries will visit Bulgaria in early September to take part in a conference in Sofia at which Equilibrium will demonstrate its new working practices.