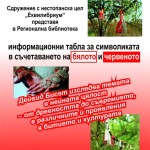 A number of years ago, Equilibrium’s chairman, David Bisset, was browsing through a book by the Scottish journalist and broadcaster, Cameron McNeish.

He gave accounts of famous trekking routes in the Scottish mountains replete with folklore and local legend. One such account provided detail of a complex mélange of pagan and Christian practice associated with a natural spring where the water was believed to have magical / curative properties. Numerous details were identical to rituals associated with Sveshtari in Bulgaria. The most striking similarity was the practice of hanging strips of cloth (‘clouties’ according to the Scottish legend).on trees and bushes adjacent to the spring.

Delving deeper using the Internet, David found reference to the spring festival of Saint Bridget deriving from the period shortly after the Christianization of the Irish and British Celts. The colour combination of red and white was of crucial significance. The symbolism was equivalent to that of the Bulgarian (and – let us not forget – Romanian) martenitzi.

This discovery grew into an exhibition of examples of the use of red and white combination by civilizations throughout the ages. It is one of the most prolific symbols known to man.

News of last year’s small exhibition at the pensioners’ club in the village of Dryanovets reached Razgrad and, on the evening of March 4th, a month-long exhibition was launched in the city’s public library. The library director enthusiastically greeted David, Galya and several junior representatives of Equilibrium. David explained the origins of the exhibition to the audience and also spoke to journalists. Earlier in the day, Galya had been interviewed by a local radio station in Shoumen.

We hope to find the opportunity to work with the library staff to sustain interest in the subject, expand the exhibition and create a book.